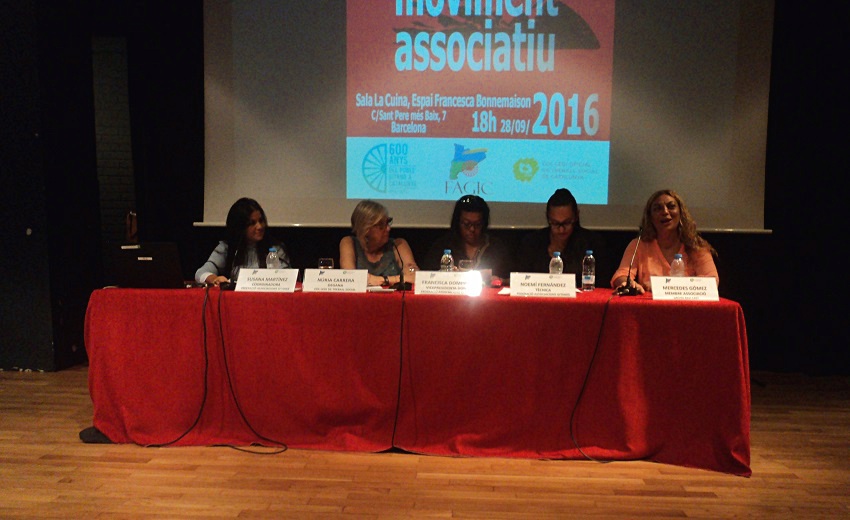 A panel discussion entitled “Romani Women and the Association Movement” organised by the Federation of Roma Associations of Catalonia and the Comprehensive Plan for the Roma People was held on Wednesday as part of the commemoration of the 600th anniversary since the arrival of Roma to Catalonia.

In spite of successful efforts by the feminist movement in recent decades to bring attention to the inequalities that exist between men and women, significant gender-based differences still exist in the social, labour, financial and political spheres, a situation that affects not only the Romani population but others as well. It is often said that Romani women are subjected to double or even triple discrimination: for being women, for being Roma and because of all of the other adversities they face. And that is why the activism of Romani women deserves special mention.

The Comprehensive Plan for the Roma People in Catalonia and the Federation of Roma Associations of Catalonia (FAGIC) organised a panel discussion entitled “Romani Women and the Association Movement”, which was aimed at making the role of Romani women in Romani activism in recent years more visible and evaluating prospects for the near future. The event took place Wednesday at the Bonneimason Francesca Library in Barcelona. An introduction to the discussion was given by Simón Montero, president of the FAGIC, and by Núria Carrera, head of the Official College of Social Work of Catalonia. Simón Montero emphasised the need to “advocate the empowerment of Romani women from the perspective of the transmission of values, and to defend the Romani culture from an intellectual perspective without resorting to romanticism or victimhood”.

Participating in the discussion was Mercedes Gómez, Francisca Domingo, Noemí Fernández and Susana Martínez – all members of the FAGIC – in addition to representatives from different generations and periods of the Romani association movement.

Lacho Baji Calí was one of the first Romani associations in Spain and Catalonia, and its uniqueness has to do with the fact that all its members have been and are women, even though its activities are not intended to exclusively benefit Romani women. Mercedes Gómez, a representative for the association, spoke about the beginnings of the Romani association movement. She explained that the movement, whose start coincided with the start of democracy in Spain, took the initiative and secured a central role within the Romani public sphere at a time when women habitually participated only in private and family-related spheres.

Francisca Domingo, a member of the Association of Romani Women of the Ponent Area and a speaker and vice-president of the FAGIC, explained the origins of the organisation and emphasised the need for a comprehensive approach to achieve gender and social equality, not just for the Romani community, but for women in general. “We believe that women are the same. Although we have different cultures and customs, we are all women, we are all mothers, we are all daughters, we are all sisters. At the end of the day we are all women with similar profiles and different characteristics, but we are all the potential engines of our families”.

Noemí Fernández, a law student and project manager for FAGIC, spoke of her experience in the Romani association movement and her participation in various projects at the European level. She said that her European experiences showed that young Europeans no longer focus on the creation of new organisations but on the creation of joint projects and the exchange of information and tools for the development of these projects. Noemí ended her talk by emphasising the need for women to have their own voice so that “we can adapt to society in accordance with our own idiosyncrasies. We want to exist in the 21st century, but we do not want that to mean losing the values that make us Roma”.

The final speaker was Susana Martínez, a graduate in economics and another FAGIC project manager. Susana compared the situation that led society to the industrial revolution with that currently faced by the Romani people: “Prejudices progress at a faster pace than any tool we could use to change our image within society. Consequently, our achievements are always invisible”. Susana called for a Romani revolution that will be based on the participation of Roma in political decision-taking. “Getting young educated Roma into the places where political decisions are taken will make it easier to get our demands on the political agenda”.

To close the event, Manel Carbonell, grandson of Oncle Manel, offered an emotional rendering of the words that his grandfather had prepared for this very occasion, an event that he very much looked forward to. “I am very happy because FAGIC and the College can start on a path that they will have to travel together, for the good of people in general and of course for the good of Roma. We must create a space for dialogue where we can exchange views and work together. Togetherness will make us stronger. We must learn to be a family and not to look out just for our own good but for the good of all people. As I got to know you – as an elderly person – at the FAGIC meeting chaired by my nephew Simón Montero and by the head of the College, my friend Núria Carrera – I am sure that together we will make it happen”.