Launch of #GispsyFilter, an online campaign against racism

Home - Launch of #GispsyFilter, an online campaign against racism 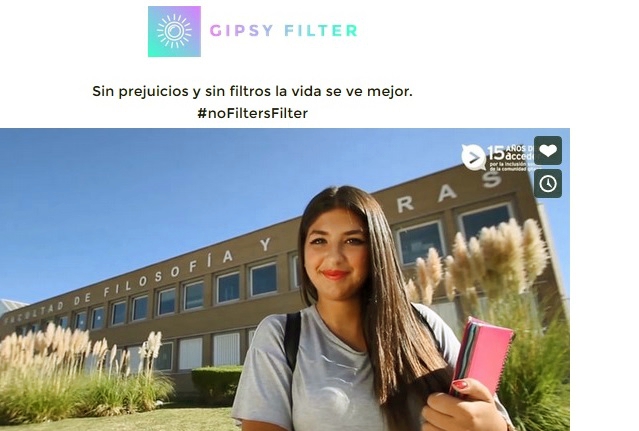 The Fundació Secretariado Gitano foundation and the Aire Nuevo Caló Romani youth association have jointly launched an online awareness campaign to encourage young people to reflect on the discrimination suffered by the Romani community.

Throughout history we have seen racist attitudes propagated through print, radio and television media outlets. Today this reality is multiplied by social networks and new internet-based communication channels. The internet has become the place where racist attitudes and thoughts are spread and grow faster than in any other medium, or at any other time in history. Social networks provide spaces where any individual may think for themselves – or pour out all their hatred and racism and have thousands of people read and amplify what they have said, with complete immunity and also with the anonymity the internet provides.

Indeed, in order to draw attention to the discrimination affecting the Romani population, Fundació Secretariado Gitano and Associació Aire Nou Caló have launched #GipsyFilter, an awareness campaign targeted at young people. The campaign is particularly focused on common stereotypes. In the case of the stereotype that typifies Roma as being “dark-skinned”, a positive spin has been added by reminding people of the summer tan that everyone likes to get. In this vein, an app called “Gipsy Filter”, which adds a fashionable tan to people in photos, has been created. Users upload a photo of themselves to the app and then apply a suntan effect.

Initially, the app shows no social messages, but when you upload photos and share them the campaign’s central message pops onto the screen: “Some people who cannot change the colour of their skin with the push of a button are discriminated against, but we think nothing of giving ourselves their dark skin tone in our photos”.

To publicise the campaign and reach the maximum number of people, a number of popular bloggers have told their readers about the app. The campaign promises to be highly successful. In the short time since its launch, it has gained more than 600,000 users and earned 10,000 “likes” on Instagram. And on the heels of the first phase of distribution of this “photo filter”, Friday saw the launch of the website https://gipsyfilter.com/ where the campaign’s true goal is explained.