The culture of a long journey

Although Roma have been in Europe for more than six centuries, we remain by-in-large unknown. Many things have been and continue to be said about our origins. These range from us being the descendants of Cain and Judas, to us being the survivors of Atlantis. Today many think we come from Romania. However, it was in the 18th century when people began to associate Roma with India. No ancient text speaks of the exodus of any group identified as “Roma” that migrated from Asia to Europe. The only evidence of our origins is the Romani language.

After having being studied and analysed, Romani has been identified as belonging to the Sanskrit family, closely related to other languages such as Hindi, Urdu and Farsi. Although our language originated from Sanskrit, we have many words borrowed from other languages such as Persian, Armenian, Slavic languages, Turkish, Greek and Romanian (Jimenez, N. 2008). Thanks to all the loanwords from these languages, it has been possible to deduce the route taken by Roma after leaving India.

As a travelled people, Roma have played a highly significant role in exchanges both cultural and material in nature. As in the case of the Romani language, Romani culture has been in a process of creation during these travels and throughout the centuries through contact and coexistence with other peoples. Although we left India more than a thousand years ago, we have retained a strong sense of Far Eastern existentialism, to which clear Arab-Muslim and Christian influences have been added. All of these factors make Roma a people with a unique and immense cultural heritage.

The celebration of life and death are still the main rituals that differentiate Roma from all other peoples, because each ritual blends a perfect stoichiometry of traditions from different peoples which are sometimes in conflict with each other but are combined with harmony and respect for the Romani cultural mix. 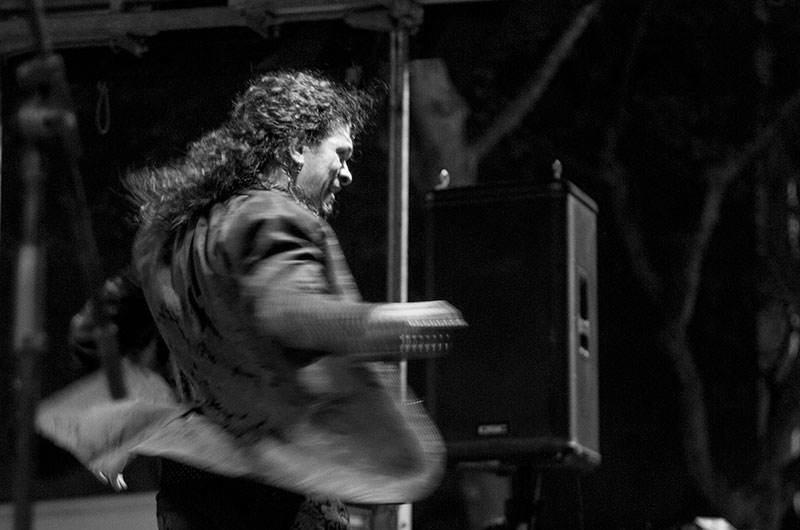 Roma learnt and adopted as their own words, values and traditions from the different places through which they travelled. Art, far from avoiding such influences, was where the richest exchanges took place. One of the first legends which attempted to explain the departure of Roma from India says that around the year A.D. 400, Persian King Bahram Gur asked a King from Northern India to send him 10,000 musicians and their wives for a festival. Pleased and impressed by the talent of the musicians, Bahram Gur asked them to permanently remain in his kingdom and gave them several hectares of land, grain reserves and livestock. The musicians, who had no experience as farmers, soon found themselves with no grain, no livestock and unproductive land. The king did not stand for this lamentable situation and expelled the 10,000 Romani musicians from his country (Fraser, A. 2005).

Although there is no way to prove the veracity of this legend, or much less know anything about the artistic abilities of the group that gave rise to the Roma community, we can say that Roma and music are virtually synonymous in the social imaginary of any European country. Much has been said about the reasons that Roma have so greatly developed their abilities for music and other arts such as painting and writing. It has generally been argued that music, being immaterial, was an art form that could be transported with ease. However, I must stress that music has a more lively character than other art forms. Music allows one to build a dialogue with the “other” instantly. And it has been in this field that Roma have had their most successful relationships with non-Roma. Music has enabled them to take part in a process of exchange, sharing and the creation of new dialogues in every corner of Europe.

The creative genius of Roma music has given rise to several unique and world-renowned genres such as Flamenco and jazz manouche”. Although Roma had a crucial role in their creation, these universal styles have been enriched by the constant exchange between Romani and non- Romani peoples.

Romani music has inspired the best composers in history over centuries. Franz Liszt, who incorporated Roma melodies into his Hungarian Rhapsodies, always showed his fascination for Romani violinists János Bihary and Antal Csermák. He was not alone: Fran Joseph Haydn, Ludwig van Beethoven, Franz Schubert and Johannes Brahms were fascinated by the completely different understanding of music that Roma possessed. They were also struck by the creativity displayed by Roma in when composing music and their virtuosity when playing it.

“The inspiration of the moment is the unstoppable engine of Romani musicians, something that at times clashes with strict classical rules, where even the cadences of a concert had to be written on ruled paper given that classical players rejected the value of and steadfast commitment involved in improvisation. The creative passion of the performer, reclaimed in the past three decades by classical music specialists, remains alive in the very roots of Romani music.

The late violinist and conductor Yehudi Menuhin passionately defended Romani influences on classical music after having come into contact as a player with another freer and more communicative way of making music. Menuhin learnt in equal measure from violinists, clarinetists and singers. He felt the lyricism, the rhythmic strength, the naturalness and the freshness of Romani influences. This influence was palpable in songs and dances by Johannes Brahms, Antonin Dvořák and Leos Jánacek. It was also evident in violin and orchestral pieces by composers as diverse as Pablo Sarasate, Fritz Kreisler, Bela Bartók and Georges Enesco…”

The improvisational and ephemeral spirit that Roma have traditionally brought to their music, along with the fact that few Romani musicians have followed an academic musical education, has caused Romani musicians to be undervalued as composers and performers. This has been particularly true in the field of classical music, where the copyrights of composers are only recognised when they write their music notes on a staff.

For several centuries Roma have appeared in many literary works, always in secondary roles, and always in a stereotyped fashion. In the best-case scenarios Roma are given a romantic and rebellious image, while in the worst of cases we appear as thieves and liars. Few writers have dealt with Roma in ways that sidestep the prevailing prejudices. In this regard, we must underscore the works of Lorca, García Márquez and Tabucchi (Oleaque, J. 2012).

Although literature has not been the most widely produced amongst Romani art forms, we can point to great writers such as José Heredia, Joaquín Albaicín, Rajko Djurik, Santino Spinelli, Bela Osztojkan and Mateu Maximoff. While hailing from different countries, they all share common themes: freedom and persecution, the travelling life, waggons, the wind and the rain (Oleaque, J. 2012).

Romani culture is not based on written language. The Romani language did not officially have a written form until a few years ago. And if we include the historical exclusion and marginalisation suffered by Roma, it is not at all difficult to understand why Roma do not possess a great literary tradition. However, we cannot overlook all the stories created by Roma and told for centuries to Roma and non-Roma alike, having been passed from generation to generation without having been written. In recent years, several initiatives have been launched with the aim of compiling these stories told in the vivacious voices of Roma.

Romani history has always been written and studied by gachés (non-Roma), which makes it difficult to know the true historical experiences of Roma: What did they think? What did they feel? We were never able to write the answers to these questions. However art, music and stories enable us to capture the emotions and the true story of Roma and hence discover a people with a willingness to interact, learn and open up to other peoples on equal terms.