Roma in the arts
—
Helios Gómez

Helios Gómez Rodríguez was a tireless artist who has been condemned to relative oblivion because of his strong connection to the anarchist and communist movements. Membership in these political movements marked the life and career of this Romani painter, also known as the “Artist of the red tie”.

Helios always paid tribute to Seville’s Triana district, where he was born in 1905. He got his start in the art world during his teen years by working as a painter at the La Cartuja de Sevilla ceramics factory. In spite of his humble origins, he managed to attend evening classes in fine arts. At this young age he also established contact with the Andalusian anarchist movement, which he would join and remain active in until 1923. His education as a painter was enhanced when he went to Barcelona and soon became active in Europe’s new avant-garde artistic movements. His first works were highly influenced by Cubism, which he gradually abandoned to adopt a style more in line with the labour movement, which turned out to be a major leitmotiv of his work. He soon found himself exhibiting in renowned venues such as Kursaal in Seville, Ateneo in Madrid and the Dalmau avant-garde gallery in Barcelona. All of this artistic activity did not cause him to abandon his political convictions, which subjected him to police persecution during the dictatorship of Primo de Rivera. To avoid such persecution, he would often spend extended periods abroad. 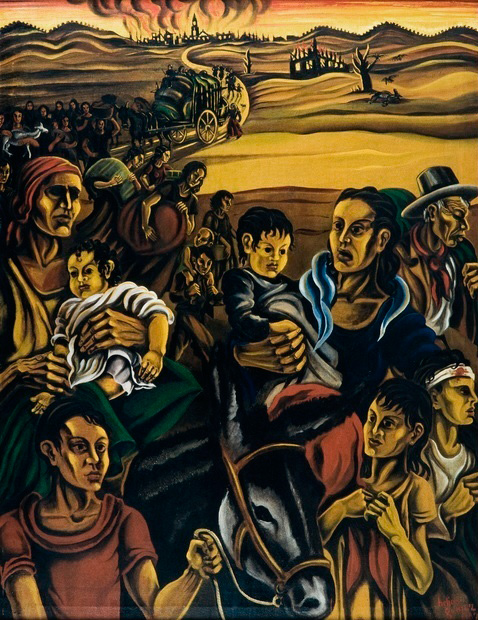 1927 found him in Paris, where he was quickly expelled for actively taking part in demonstrations against the execution of anarchists Nicola Sacco and Bartolomeo Vanzetti. This brought him to undertake a long journey to Amsterdam and Vienna, and to later reside in Brussels, where he contributed illustrations to the book Rien qu’un homme by Max Deauville. He also exhibited at the Café des Arts and the Lanterne sourde. These exhibitions raised his profile to that of an international artist. His success brought him into contact with the painter Peter Alma, with whom he would develop a great friendship and through whom he would come into contact with the Progressive Kunst Marxist avant-garde movement in Cologne. This movement deeply influenced Helios’ art and gave him the opportunity to travel to the USSR as a delegate of cultural organisations that promoted Soviet art in Europe. Later, in 1930, he lived in Berlin and published his series Días de ira. Yet he remained in the German capital for only a short period, as the end of the Primo de Rivera dictatorship presented him with the opportunity to return to Spain and come out of hiding. A year later he began to work on behalf of social struggle, writing for Communist newspapers such as L’Hora, L’Opinió and La Batalla. At this time and as a result of his stay in the USSR, he abandoned the anarchist movement and joined the anti-Stalinist Communist movement within the Catalan-Balearic Communist Federation (FCCB). Around that same time his Revolución Española series appeared.

In 1932 and as a result of his work for the Communist Party, he was arrested and imprisoned in the Jaén jail. Thanks to his friend Peter Alma, he was released on bail and was able to participate in the in Congress of Proletarian Artists in Moscow. The long Belgian miners’ strike in Borinage marked the artistic style of this painter, who permanently departed from the Soviet Realism promoted by the party to focus on the production of posters and graphic art, which he considered to be the true creative platforms for real proletarian art. After the unfortunate events in Asturias (1934), he published his most famous series, Viva octubre. 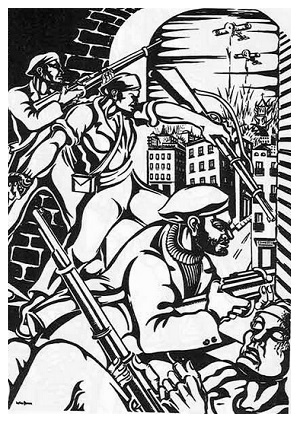 Poster about the Asturias revolt of 1934. ↵

Just before the outbreak of the Spanish Civil War, Helios was appointed president of the newly created Graphic Arts Union, and by 1936 he was fighting rebel forces in the barricades of Barcelona. He was appointed political commissar of the UGT (General Union of Workers) and was active in the civil conflict, eventually organising the Ramón Casanellas column. He was removed from the front after being accused of murdering a captain fighting on his own side. He was also pursued by Stalinist Communist forces, having been accused of being a Trotskyist and libertarian, which caused him once again to embrace anarchism. Yet he continued to write for labour union newspapers such as El Frente, a publication linked to the CNT (National Confederation of Labour) union. He also organised an exhibition about Buenaventura Durruti. He participated in group exhibitions sponsored by the Catalan Government. A noteworthy work from this exhibition was his oil painting Evacuación, which can be seen today at the MNAC (National Art Museum of Catalonia) in Barcelona.

The Republican defeat resulted in him being taken to various concentration camps, first in France and then in Algeria. In 1942, after his release, he returned to Spain where he founded the group Liberamiento Nacional Republicana in 1944, which led to his imprisonment from 1945 to 1946 and from 1948 to 1954. He painted the Romani chapel in what was prophetically known as the Modelo prison in Barcelona. This mural, whose preservation is still being disputed today, was whitewashed in 1996 but subsequently restored. Because of his imprisonment, Helios’ health was severely compromised, and he died in Barcelona in 1956.

The life and work of Helios Gómez was marked by a vigorous productivity that was deeply connected with the social pulse of the hectic time in which he lived. His first expositions at Kursaal in Seville revealed an art that brings us into contact with the Romani world. Captivated by the influences of Futurism and Cubism, he began to use forms with a new lively language and the bold and dynamic strokes that would come to characterise his work. The themes of his work were harsh, direct and founded on a highly realistic narrative. Following his travels in Europe, he entered the Soviet orbit. Nonetheless, party leaders were unable to pigeonhole the vivacious and libertarian style of our painter. It was in fact during this period when he embraced graphic and poster art and deepened his commitment to art of and for common citizens. This commitment is evidenced by his series Viva octubre, Revolución Española and Días de Ira, whose themes were influenced by the travails of the working class.

His final work, La Capilla gitana, was a return to his origins, a look back to a quiet and peaceful past, to his early days. One can almost see in his winding brushstrokes that the artist was seeking an existential harmony reflected in the warmth of the gaze of the Virgin and the unusual colouristic nature of his work.