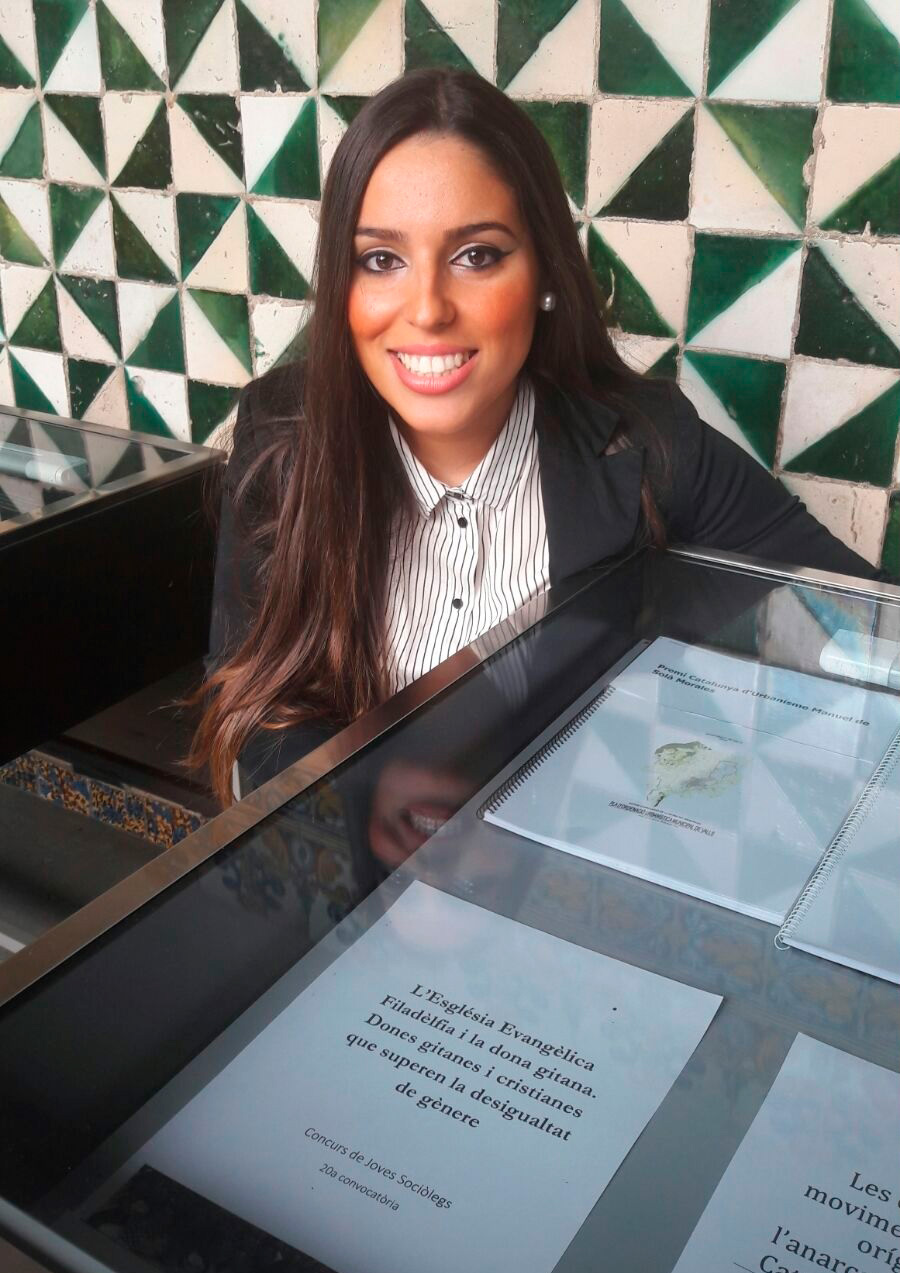 Jelen Amador, a young Romani from Barcelona’s Zona Franca district, holds of a Bachelor’s Degree in Law and is currently pursuing a PhD in Sociology. Jelen just received the first Young Sociologists Prize awarded by the Catalan Studies Institute for her research on the Evangelical Church of Philadelphia and the role played by Romani women in overcoming gender inequalities.

How does a Romani girl, with all the difficulties that she can expect to encounter, decide to study and get as far as you have?

Since I was little I had always liked very much to study, to go to school. I had many dreams and expectations and always dreamt of getting to university. I was also greatly influenced by American movies and TV series. The typical courtroom scenes particularly got my attention insofar as they related to justice and to having a commitment to society and to equality. Seeing all those impressive courtrooms and women lawyers made me imagine myself as a lawyer in the future.

Later you find out that you’ll face many barriers in your academic career. Because nobody in my house had gone to college, I had no role models. I had many fears and uncertainties that nobody could resolve. I often imagined the worst – that I was incapable of going to college and getting a law degree. Then came the time to go to high school, where I had no Romani classmates. That loneliness and the invisibility of my Romani identity and culture within the educational system throughout my entire academic career made me ask myself frequently whether what I was doing went against my identity. I even wondered whether going to university would make me less Romani.

I had many doubts. But I was also eager and enjoyed the support of my family and of people from the church. All of this gradually made it possible for me to overcome all these barriers. I managed to finish high school with good marks, which allowed me to take the plunge and try to get into university.

In your story of overcoming adversity, what was the key to getting past all of the barriers and uncertainties?

The most important factor has undoubtedly been the support of my family. Also important has been the support of people in my community and in my church, and that of my friends. Moreover, my faith in God helped me to take this step because I am convinced that God wants the best for us. Today this means having educational success, getting into university and for your success to serve as an example for others, especially the people in your community. As a Roma and a Christian, I also felt that sort of commitment: that I should use my story and my life to help other Roma have the courage to take this step after seeing that I was able to do so.

Looking back on the hard work that has earned you a degree in law as well as having had to overcome all the barriers you have told us about, what do you see as the most positive aspect of having furthered your studies?

I see many positive things. I had always been well aware that getting to university opens many doors and represents having more opportunities in the future and a better quality of life, and this is indeed what I am experiencing. Also very positive is how proud my family and the people around me are, and seeing the satisfaction of everyone who gave me the support I needed to get this far. It is also important for me to be an example for other Romani girls and women and for them to see that if I could do it, so can they. It is certainly a dream to be able to help promote the education of the Romani people as well as the empowerment of women, to work for the inclusion of Roma and to investigate topics related to my people and the Evangelical Church of Philadelphia.

You recently received the Young Sociologists Prize awarded by the Institute of Catalan Studies. This is a very important and significant award for the Romani people. The award was for a research project that analyses the role of the evangelical church in the transformation of gender inequality. What main conclusions have you reached?

This is an area that interests me greatly, because I am a member of the Evangelical Church of Philadelphia and my parents are pastors. I’ve always been very interested in these issues. I also find it interesting because it is a field in which there are many prejudices against Romani women and the Pentecostal minority. My idea is to make all the contributions made by Romani women in these places of worship visible, and thus help to break down the prejudices and stereotypes which say that women of the Evangelical Church of Philadelphia are submissive and that they also occupy secondary roles, lack initiative and do not perform any other function, amongst other views. In fact, the initial results of my research indicate that the role of the Romani women in the Evangelical Church of Philadelphia is very important because it is leading to major changes and helping to transform the households of many Romani families.

Many people think that the church encourages gender segregation and promotes the crystallisation of non-egalitarian gender roles. You say that women are starting to make changes. Could you comment on a particular transformation or dynamic within the Evangelical Church of Philadelphia that is being led by women?

Romani women play a very important role. Indeed, to ensure the proper functioning of the Evangelical Church of Philadelphia, it is necessary for individual churches to be coordinated by both male and female pastors. This is because the Evangelical Church of Philadelphia recognises the need to cater specifically for the women in their churches, and who better to do this than other women, female pastors?

In addition, many changes are occurring within the church, including some which are significant in regards to gender. I intend to highlight such changes – such as the real role occupied by women within the church as active participants in both operational and decision-taking aspects – in my research.

I look back and see how my sister was living, how a woman living in the Evangelical Church of Philadelphia lived, how they could dress, and I ask myself how it works today, as I experience it and see the fruit of the roles of many women. The life that I lead within the church is very different compared to how it would have been a few years ago.

Do young people play an active role within the church?

Yes of course. If you compare the Evangelical Church of Philadelphia with others, you can see that people who are very young can achieve important positions such as candidate, pastor, or choir member. I think that young people are very much taken into consideration. And as many pastors say, and as it is natural amongst our people, the elderly are respected for their experience and wisdom. Young people bring much strength and many ideas. They are also quite active in the process of change and highly valued within the church.

Outside the specific field of your research, what challenges do you think the scientific community should take on in regards to the Romani people?

Based on my research, I see that the Romani community are making many demands to improve their visibility and social participation. This is also true with respect to research work. Until recently it was common to carry out research projects without the participation of Roma. This led to the results and conclusions of research being based on prejudices and stereotypes against the Romani community. However, Roma are now demanding more involvement.

They are also demanding that research should address the real problems that the Romani community faces, and that studies should not limit themselves to just describing problems but should also offer solutions that will impact society. I think this is the way we should proceed. However, the scientific community and researchers also bear a great deal of responsibility. They must offer solutions that will improve the situation of the Romani people and should incorporate Roma themselves into their research staff to avoid falling back on old stereotypes and prejudices. In short, I think this is the challenge that the scientific community faces: to work for change and achieve social impact in a way that will improve the lives of Roma.

As a Romani researcher yourself, what changes would you like to see within the Romani community?

I believe that there is much work to do, especially in the field of education. We need to improve the educational context of the Romani people. This includes providing solutions to the barriers our community faces, increasing our opportunities and promoting our inclusion. Education will undoubtedly be the main route to our inclusion. We must also improve our status in areas such as housing, the labour market and health. All this will have to take place through an improved, high-quality education system. It is also very important to empower and promote the participation of Romani women.