Inauguration of the first archival collection about Roma in Catalonia

Home - Inauguration of the first archival collection about Roma in Catalonia

On Wednesday, the first archival collection dedicated to the Romani people and open to the general public was inaugurated at the Biblioteca del Nord library in Sabadell. 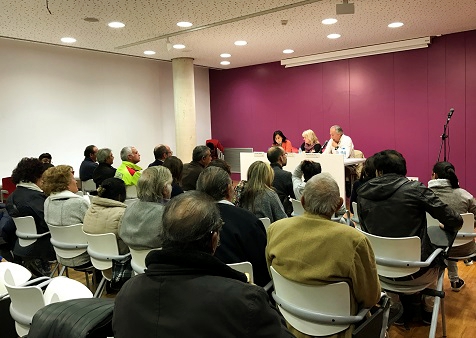 Apart from being amongst the least understood cultures, the Romani culture also tends to be highly prejudged and under-valued. It took six centuries of coexistence between Roma and non-Roma for Romani culture to finally begin to get the recognition it deserves. This is one of the main goals that the Catalan Government has set as part of its commemoration of the 600th anniversary of the arrival of Roma to Catalonia. Over the course of an entire year, a number of initiatives are being implemented to increase the visibility of Romani culture. Amongst them is the opening of the first archival collection about the Romani people located in a public library in Catalonia.

The collection contains more than 200 documents – including books, magazines and audiovisual materials – covering a wide range of topic related to the Romani people. Also included are a children’s section, materials for learning the Romani language, as well as materials on literature, cinema and music. The collection was made possible by library contributions provided by the Catalan Government’s Romani People and Social Innovation Programme, donations from Romani organisations, as well as the inclusion of documents that were already in the collections of Sabadell’s network of municipal libraries.

The compilation of this archival collection began to take shape more than two years ago. At that time, when the last Comprehensive Plan for the Roma People (2014 – 2016) was approved, the need to create such a collection of this type was noted. Since then the Comprehensive Plan’s cultural group has nurtured the project, which has also benefited from the cooperation of the Catalan Government’s Cultural Department in matters related to its development and management.

The location chosen for the collection was the Biblioteca del Nord library in Sabadell, the municipality with the largest population of Roma in Catalonia. Presiding over the opening ceremony were: Bernat Valls, Director General for Civic and Community Action; Ramon Vílchez, head of the Romani Community Care and Social Innovation Programme; Montserrat Chacón, Cultural Councillor for the City of Sabadell; and Carme Fenoll, head of the Cultural Department’s Library Service. As Bernat Valls explained, “throughout history the Romani people must have felt powerless upon seeing so much information and research being published about them that had absolutely no scientific or ethical basis. The documents in this collection meet ethical and equal treatment criteria, in sharp contrast to the stereotypes about Roma that are so prevalent”.

The opening ceremony also included the presentation of a didactic comic book that narrates the history of Roma since their arrival to the Iberian Peninsula in 1415. Entitled “A People within a Country”, the book was prepared by the Sabadell Romani Association – in collaboration with the illustrator Daniel Díaz Heredia and a group of Romani high school students from the city of Sabadell – with the aim of introducing Romani history in schools.